Sydney is the front runner in metro mobility in Australia. Facts are being created very quickly and with a high emphasis on safety. With five Herrenknecht tunnel boring machines, experienced construction consortiums are delivering one breakthrough after another: 31 kilometers of new metro tunnels within 17 months.

Jurek Szimmuck (right) knows: “The success is primarily thanks to the team spirit on site.“

On the evening of March 16, 2020, Herrenknecht’s project manager Jurek Szimmuck can finally breathe a sigh of relief at Sydney Harbor: after crossing the harbor basin, Mixshield-TBM 'Kathleen' makes its final breakthrough in the second construction phase of the Sydney Metro. The cutting wheel comes to a halt at Blues Point, within sight of the Harbor Bridge and the world-famous Opera House. Martin Bell, Plant Manager of the joint venture JHCPBG (John Holland CPB Ghella), summarizes the project as follows: “Our own people were very happy with the design and operability of the machines. When the crew makes good progress underground, they like coming to work. And then the project is a success.” Feedback like this is crucial for Jurek Szimmuck and his colleagues. Then they know Herrenknecht has truly accomplished their mission.

Starting in the Australian spring in 2018, five Herrenknecht TBMs burrowed through Hawkesbury sandstone over a distance of more than 31 kilometers. “Excellent machine availability of around 99 percent speaks for itself,” says Jurek Szimmuck. “The machines managed up to 85 meters of tunnel a day and 324 meters in a week.” The site crews and machine technology stepped on the gas for almost a year and a half. “This success is thanks to the team spirit on site,” said Szimmuck. “With our colleagues on the customer side, we felt like we were part of a big jobsite family. At some point we understood each other implicitly and complemented each other fantastically.” Leonardo Pia, Tunnel Manager of the contracting joint venture, wrote to the Herrenknecht team in this regard: “I believe the key of success for this project was more in the human factor side of the game. You’ve really been able to understand the best way to interact with us at all levels, from senior management to the field“

Herrenknecht already had a long history with the tunnelling professionals Down Under: in 1995 Herrenknecht received the first order for a large-diameter TBM (10.71 meters) for the Sydney Airport Rail Link. In the run-up to the 2000 Olympic Games in Sydney, a new rail connection between the airport and the city center was created for the international audience.

“We could always count on Herrenknecht to respond quickly and make the necessary modifications.“

By assembling the five custom-built TBMs for Sydney Metro at the Herrenknecht subsidiary in Guangzhou it was possible to reduce the transport distance.

Sydney Metro will now transform mobility for more than five million people. “The signing of the tunnelling contracts in 2017 was the highlight for me so far,” says Hugh Lawson, the client’s Project Director. “This transition from planning to delivery was the reward for years of hard work. At the time, we all had tears in our eyes with happiness.” Nationwide, Sydney Metro is the largest infrastructure project for public transport: in 2024, there will be a total of 66 kilometers of metro rail and 31 metro stations. The route will run from suburbs in the north west, under the harbour and Sydney Central Business District, to the south west to Bankstown. At peak times, the metro’s driverless trains will bring up to 34,000 passengers an hour to their destinations safely and on time. “But the key factor is the metro's potential,” says Hugh Lawson. “In contrast to conventional rail concepts, the metro can grow with the city. We can expand it and increase the frequency. In future, trains could even run every two minutes.” To date they have already been coming every four minutes: the Metro North West Line was opened in May 2019, representing a premiere of the first metro system on the continent.

Herrenknecht supplied this large-scale project with the complete set of tunnel boring machines for the section 'City & Southwest'. The first drive took place in the spring of 2018. For the joint venture of John Holland, CPB and Ghella, four Herrenknecht Double Shield machines went to work on the route under the Sydney Central Business District toward the south west. They excavated 14.5 kilometers of twin tubes with diameters of 6.96 meters. For the tunnel under the harbour, the joint venture chose a Herrenknecht Mixshield. With this technology they were on the safe side in view of the heterogeneous geology and high water pressure. With Mixshield-TBM 'Kathleen', the site crew had no trouble building a 900-meter long twin tube with a diameter of 7.04 meters under Sydney Harbor.

Above: The tunnel boring machines were shipped to Sydney in the largest possible modules, which significantly accelerated assembly on site.

The crossing under the harbour, through clay, silt, sand, rock, and Hawkesbury sandstone, was a particular test in the project for both workers and machines. Since July 2019, Mixshield-TBM 'Kathleen' dug its way forward with up to 35 meters of overburden and a maximum tunnel depth of 40 meters under sea level. Water pressure amounted to 6.0 bar in places. Specialists carried out scheduled tool changes on the cutting wheel at around 4.5 bar water pressure.

The geology at the beginning and end of the tunnelling section was surprising due to the higher proportion of clay. This led to clogging of the cutting wheel during the first drive, which reduced the advance rate somewhat. By adapting the cutting wheel design and the flushing concept, Herrenknecht reacted quickly to the prevailing conditions. In early November, these were implemented on site a few days after the first section breakthrough.“We could always count on Herrenknecht to respond quickly and make the necessary modifications,” says Martin Bell the joint venture’s Plant Manager. According to him, this improvement accelerated the second drive by six to eight weeks. After about two months with disassembly, optimization, return transport to the launch shaft, and reassembly, the TBM was ready for the next job. The joint venture was able to keep to the schedule promised to the client – and this is particularly important Down Under. Herrenknecht took high Australian safety standards into account when designing the tunnel boring machines. Modification of the air filters, for example, played a major role in tunnelling for the Sydney Metro. Since the so-called Hawkesbury sandstone consists largely of silica and the presence of quartz dust poses a health risk, filters must be as close as possible to any source of dust. “Precisely for this we got together early with the customer and our colleagues at the Australian subsidiary and developed and implemented appropriate technological solutions,” says David Salameh, who headed project management in Schwanau.

After eight months in operation, Mixshield “Kathleen” was barged back across Sydney Harbor.

Innovative engineering and operational flexibility in aspects of design, assembly, or in logistics definitely help to optimize technology and tunnelling economically as well. The tunnel boring machines were shipped to Sydney from Herrenknecht’s modern plant in Guangzhou, China, in the largest possible modules. In Sydney Harbour a deck crane hoisted the compact TBM components onto a barge. In this way, the jobsites in the port area could be reached very quickly. Specially-designed gantry cranes at the shaft lifted the modules weighing up to 240 tons before lowering them safely into the depths for final assembly. “This saved us and our customers thousands of working hours for transportation and assembly,” concludes Herrenknecht engineer David Salameh. The four Double Shield machines were ready for use just six weeks after delivery on site. Normally this would take two to three months. The project also benefited from the integration of subsidiaries that provide facilities and services related to tunnelling. Whether H+E for belt conveyors, VMT for navigation devices and jobsite monitoring, or GTE to complement the jobsite crew: the well-rehearsed coordination processes between the companies contributed to the team success.

Plant Manager Martin Bell can look back on various different projects with Herrenknecht technology in Australia, Singapore, or Thailand. “I particularly appreciate that the company really listens to its customers,” says Martin. Nowhere in the world are as many Double Shield machines used as in Australia, he says. “We already had a lot of experience we could bring in.” On the jobsites at the latest, Martin can tell if the joint venture’s input is being optimally implemented by the TBM supplier. From the start Martin Bell worked closely with David Salameh and his Australian colleagues.

Charles Howarth, head of the Australian subsidiary, has been the first point of contact for customers and their challenges down under for over 13 years.

On to the next one!

That TBM builder Herrenknecht is at the forefront of the booming tunnelling business Down Under is also thanks to Herrenknecht engineer Charles Howarth. He started his Herrenknecht career 13 years ago at the subsidiary in Brisbane, around 900 kilometers north of Sydney. “Our core concept is: even if we are not the cheapest provider of tunnelling technology, we always want to offer the best solutions for the project and our customers,” he says. In the normally easily penetrable sandstone of Sydney, this means providing technology that allows the tunnelling experts on the client side to deliver consistently high advance rates. “One of the customer’s requirements, for example, was to achieve 250-meter advances without tool changes,” says Howarth. “That’s ambitious, given the tremendously abrasive Hawkesbury sandstone. And then it was actually achieved thanks to the extremely robust disk cutters from Herrenknecht.” These were equipped with cutting rings made of project-specific material compositions.

Charles Howarth was impressed by the excellent communication and competently coordinated overall logistics for the Sydney Metro project. The Herrenknecht subsidiary trained the customer’s personnel before their deployment. For this, Herrenknecht used an erector simulator for ring building, had an existing cutting wheel sent from Brisbane to prepare specialists for upcoming tool changes and coordinated workshops with experienced machine operators. From Charles Howarth’s point of view, such training projects and the mutual learning process are a win-win situation: “We combined our strengths and then quickly grew together on the project.” One of the latest chapters Down Under will be written in Brisbane, where the city’s Cross River Rail project is the next underground rail being constructed in Australia. Two Double Shield machines from Sydney Metro will be completely refurbished and used for Cross River Rail, the latest in a fast-growing series of Australian underground rail projects.

All around online magazine

TEAMWORK INTO THE DEPTHS

The mining experts of the Nezhinsky Mine in Belarus are currently rewriting mining history using a new type of shaft sinking technology.

Pioneering infrastructures are booming in Australia and New Zealand. Learn more about innovative traffic and utility tunnelling in Oceania.

More
All Around issue #11

Herrenknecht presented its extensive portfolio at four booths demonstrating where the journey in tunnelling is going.

TOGETHER IN EVERY DIMENSION

Find out how mechanized tunnelling from Herrenknecht shapes the world of tomorrow.

Along the lifeline pipeline. In any terrain.
Efficiently cross under tough key sections.

In rough environments, the realization of ambitious plans calls for straight solutions and outstanding performance.

Re-using premium technology calls for professional remanufacturing. This opens up new potentials for our industry.

Trailblazing technology for all ground conditions 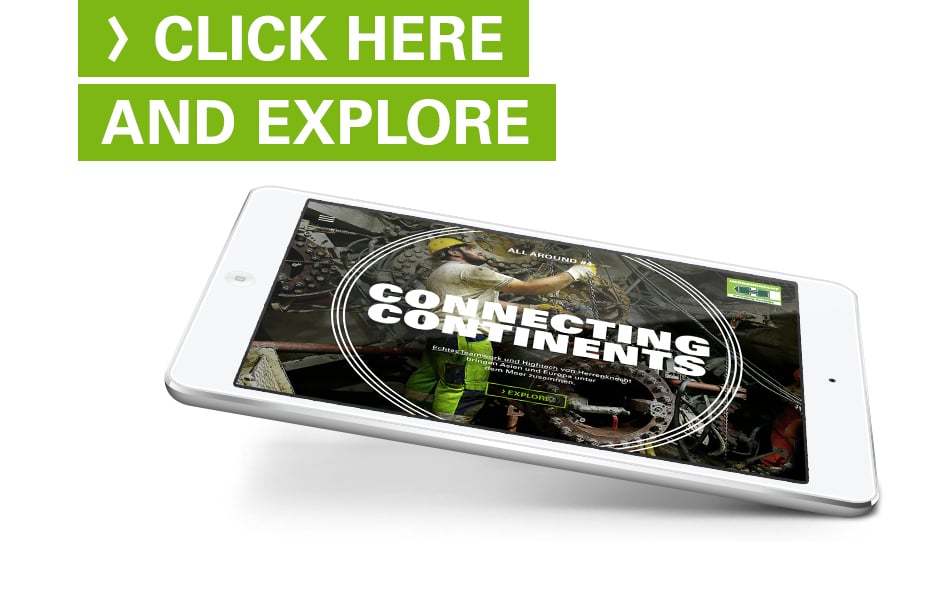 Herrenknecht All Around is a digital magazine published by the Herrenknecht Group. In our online issues, reporters and photographers feature exciting and latest stories from the global world of mechanized tunnelling.
Subscribe to our mailing and receive information on the current issues.