The future belongs to the city

More and more people are moving to cities. To deal with the changes in the growing urban centers, planners need to think about going underground. A big part of the important infrastructure is under the surface – and innovative underground structures create space for new opportunities.

There are currently 30 megacities in the world with over 10 million inhabitants like Istanbul.

For decades, urbanization has been progressing inexorably: today already, half the world's population lives in urban areas; by 2050, two-thirds of all people are expected to be city dwellers. Today's metropolises continue to grow, creating new conurbations of unprecedented scale. There are currently 30 megacities in the world with over 10 million inhabitants – ten more cities will soon exceed this figure. Countries in Africa, Latin America and Asia are developing particularly dynamically. Nevertheless, China remains the example of superlatives: currently there are already 125 cities with over a million inhabitants, in ten years there will be more than 200.

Urbanization holds great opportunities and even greater challenges. On the one hand, the density of the city can help meet the citizens' needs efficiently. It provides access to education and work, goods and services, social participation and medical facilities. Road networks, electricity and water supply can be developed and operated up to a third less expensively than in rural areas. Cities are places of social progress and innovation as well as drivers of economic growth. Worldwide, they generate about 80 percent of gross domestic product. In developing and emerging economies in particular, they attract people who want to escape poverty and hope for a better future.

However, where cities grow unchecked, the positive aspects of urbanization quickly turn into the opposite. In many places, slums and traffic chaos arise, crime rates increase and the health situation of the inhabitants gets worse. The problems facing cities like Lagos, Mumbai or São Paulo today have already been experienced by the metropolises in western industrial nations in the course of their rapid growth in the 19th century. They only became the modern urban centers we know today as a result of massive construction measures for water pipes, sewers, electricity and metro systems. History shows that urbanization can only develop its positive potential if investment in infrastructure is timely and well thought out. 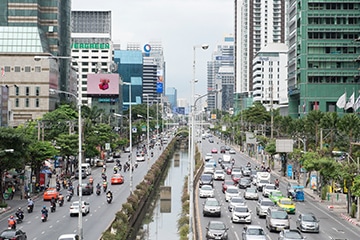 Whether in small towns or metropolises, planners must develop innovative solutions to keep pace with population growth. And because much of the necessary urban infrastructure is underground, underground pioneers are at the forefront in shaping global change. China's Pearl River Delta is currently becoming the largest metropolitan area in the world:

By 2020, Guangzhou, Shenzhen, Hong Kong and eight other metropolises and cities are expected to merge into a megaregion with 120 million inhabitants. In just a few decades the delta along the Pearl River has developed from a rural area to China's economically strongest region. The municipalities show how megacities can be planned and developed in the 21st century. They are investing 215 billion euros in infrastructure projects, modernizing airports and seaports, expanding the road network and laying around 6,000 kilometers of track for high-speed trains, inter-city connections and subways. Tunnel boring machines from Herrenknecht are proving their value here in several hundred projects, in the hard granite under Hong Kong as well as in the sediments along the Pearl River.

On rails instead of in congestion

The development of the individual cities in the delta is breathtaking: on average, Guangzhou, the largest metropolis of the booming region, grew 7.7 percent annually between 1990 and 2006, and Shenzen even 20.8 percent. The expansion of rail transport will fundamentally change the lives of people in the delta, with trains and metros providing an alternative to the infamous congestion and traffic chaos at the evening rush hour. In Guangzhou the metro already carries between four and eight million passengers a day, with another 200 kilometers of track to be added over the next five years. Fast inter-city connections also make people more flexible when choosing their place of residence.

In September 2018, the Express Rail Link (XRL) was inaugurated, connecting Hong Kong with Guangzhou, Shenzhen and other cities. For this Hong Kong built the West Kowloon terminus, which is completely underground and offers space for 15 platforms on four levels. During peak hours, the XRL runs every three minutes. Passengers need only 48 minutes now to reach the center of the Pearl River Delta, instead of up to two hours by rail or four hours by bus, thanks partly to the six Herrenknecht TBMs used on the route.

Safe operations under in confined spaces, like here in Hong Kong.

In Mumbai a 6.25 meter diameter Gripper TBM excavated over 6 kilometers of a water tunnel through hard basalt.

All around the world, Herrenknecht tunnel boring machines are working their way through the underground for projects like this. They help to ensure the supply of rural regions, to deal with the constant growth of the cities of tomorrow, to relieve traffic and to connect urban centers with their surrounding areas. The applications and services are as varied as the infrastructural challenges in the city and in the countryside. Between July 2017 and August 2018 a Herrenknecht Mixshield crossed under the Yangtze River at a depth of 74 meters so that the metropolises on China's east coast could be supplied with electricity from the country's interior by means of gas insulated transmission lines (GIL). In Ecuador, two Double Shield machines bored an almost 25 kilometer long supply tunnel for a hydropower project, with the help of which the country wants to raise the proportion of hydropower in its energy balance to 90 percent. And in Mumbai a 6.25 meter diameter Gripper TBM excavated over 6 kilometers of a water tunnel through hard basalt. With the help of a dam on the Vaitarna River, the city administration had opened up a new water source and was thus able to improve the supply of fresh water to Mumbai, especially during periods of drought.

In more than 4,100 reference projects, the tunnelling competence of the tunnelling industry is proven again and again with Herrenknecht technology, as in Wuhan, a city at the most important crossroads in central China, which will soon join the league of megacities. Since 2017, the city has been expanding its metro network by more than 140 kilometers, including a crossing under the Yangtze River. In the center, a gigantic tunnel with double functionality is being built: a three-lane road runs on the upper deck, with the metro below. In some places, the more than two and a half kilometer long tunnel alignment runs nearly 40 meters below the water surface, where a high water pressure of 5.3 bar must be dealt with. In addition, the tunnel also runs through complex geological formations, partly entirely through sand and clay. Two project-specific Mixshields from Herrenknecht with diameters of 15.7 meters are being used. Thanks to state-of-the-art tunnelling technology, tunnelling is possible even in sensitive inner-city environments without significantly affecting life above ground. In Freeport, Texas, contractors and planners were faced with a special challenge: to build a pipeline they had to cross under the Dow Barge Canal, various roads, multi-track railway lines and a flood protection levee. Precisely targeted equipment was crucial here. To put the entire pipeline into the ground, a 750 tonne Pipe Thruster was connected to the 1,000 millimeter diameter AVN machine. Using the Direct Pipe® method, this “powerhouse” delivered the required thrust non-stop.

Thanks to state-of-the-art tunnelling technology, tunnelling in Wuhan is possible even in sensitive inner-city environments without significantly affecting life above ground.

Cities are growing into the depths

Wherever it gets too crowded above ground, urban planners increasingly think about going underground. Thus many metropolises in Europe and North America, which, in contrast to their counterparts in Asia and Africa, are growing only comparatively slowly, are once again facing a turning point: they want to move away from the concept of a car oriented urbanization, which has shaped their architecture for decades. It has after all become clear that more roads only produce more traffic. Because metropolitan areas such as New York, London, Paris or the Ruhr area are on the verge of gridlock every working day, rail transport is being expanded on a larger scale. Crossrail in London or Grand Paris are among the groundbreaking projects that many a TBM operator already calls the highlight of his career.

Because lack of space makes people inventive, completely new ideas are being pursued underground. In a former air raid shelter under London's Clapham district, vegetables and grain thrive under LED lamps. According to the operator, the hydroponics there require 70 percent less water than plants in conventional agriculture. In Shanghai, the first underground hotel opened in a disused quarry, with 336 rooms and suites. An architectural practice in the bursting metropolis of Mexico City already has plans for an "earthscraper": an underground building with 65 floors that protrudes 300 meters down into the earth as an inverted pyramid. The Finnish capital of Helsinki shows how great the potential of the underground is: there are already some 400 underground structures there, including a church, a shopping center, a bus station and an ice rink.

Singapore as a shining example

Singapore is considered a shining example of urban development above and below ground. Green skyscrapers, vertical gardens and urban farming provide space for a diverse plant world that serves the city state as a natural air conditioning system. The high frequency metro system is regarded as one of the densest and most expensive in the world, a new private car can only be registered if an old one is taken off the road altogether. The city is not only growing upward and – with artificial islands in the sea – outward, but also downward in the underground. There are already sidewalks, 17 kilometers of expressways and 100 kilometers of subway lines running underground. You can go shopping in underground shopping malls and in the future, garbage could also be disposed of via an underground pipeline system. With the gigantic construction project Deep Tunnel Sewerage System (DTSS), Singapore is now investing more than $6 billion in the future of its wastewater management – making it a little more independent of the supply of fresh water from Malaysia. Construction on the first phase of DTSS, during which 13 Herrenknecht tunnel boring machines (TBMs) were used, was completed in 2008. For DTSS phase II all 19 TBMs required are being supplied by Herrenknecht as well as a Vertical Shaft Sinking Machine (VSM). Herrenknecht is also supplying extensive additional equipment.

In order to handle urban change around the world, the Global Infrastructure Hub estimates that more than 85 trillion euros will need to be invested in transport, energy, water and telecommunications by 2040. So urbanization continues – and the underground plays an increasingly crucial role in that development.

With the gigantic construction project Deep Tunnel Sewerage System (DTSS), Singapore is now investing more than $6 billion in the future of its wastewater management.