Horizontal Directional Drilling is what Éamon Foley of Coe Drilling Pty Ltd. does on a daily basis. The Brisbane-based company is Australia‘s largest Horizontal Directional Drilling Contractor. But this project was a challenge even for specialists like Foley and his colleagues. “The jobsite was between a residential area and a popular beach,” says Foley. “We had to house the HDD Equipment and the material in a very tight space.”

FOR THIS HDD PROJECT WE NEEDED A MOBILE, YET POWERFUL MACHINE.” 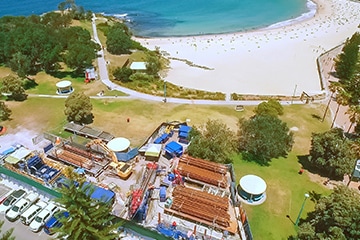 Jobsite in a tight space: a residential area behind, a beach directly in front. From this location the pipeline for data cables was installed under the seabed.

Called Coogee Beach HDD Shore Crossing, the project paves the way for a massive data link: it involved installing underground steel conduits for fiber optic cables to a point off the coast of Sydney. From there the cables continue their journey to Perth in the southwest of Australia. Then they run further on via the Indonesian capital Jakarta to Singapore.

Total length of the underwater cables: around 9,500 kilometers. Coe Drilling was only responsible for the first 1,940 meters, but they were quite something: two steel pipes each ten centimeters in diameter were first drilled to a maximum depth up to 53 meters below sea level. In the sandstone under the sea, the alignment then continued in a horizontal curve of 52 degrees before it reappeared on the seabed. “A challenging task for a small jobsite,” says Éamon Foley. On top of that, the HDD crossing also called or very precise control. The solution was an HDD rig from Herrenknecht with a pulling force of 250 tonnes. The mobile crawler rig proved to be extremely flexible even under tight space constraints. “The rig worked very efficiently in a tight space,” says Foley. “With the use of a drill pipe handling system, the drilling process was automated.” After six months and successful completion, the drill pipe was recovered from the seabed and the steel conduits were ready to receive the fiber optic cables.

After sunset, Doha looks like a mixture of science fiction and the fairy tale Arabian Nights: glass towers, squeezed together, sparkle in every color imaginable. The construction boom in the State of Qatar is announcing massive changes. Doha is growing, and growing, with currently about 1,500,000 inhabitants. The economy is also being transformed: away from oil and gas, toward more industry, health, education and tourism.

WITH HERRENKNECHT MICROTUNNELLING MACHINES WE‘VE BEEN ON THE SAFE SIDE FOR MANY YEARS.”

In the course of the modernization, Doha has great plans for its underground. In a first step, 21 Herrenknecht TBMs created 112 kilometers of metro tunnels. Now construction of a new sewage system has begun. IDRIS, Inner Doha Resewerage Implementation Strategy in short is the name of the plan to renew Doha‘s wastewater system from scratch. More than 100 kilometers of sewerage lines are planned. “The old system could only transport sewage out of the city by means of numerous pump stations – and was increasingly reaching its limits,” says Jamal A‘bed, Head of Tunnelling at the Qatar Trading & Contracting Group, in charge of the construction of 24 kilometers of sewerage lines beneath the densely built-up old town. Eight microtunnelling machines from Herrenknecht have been in operation since March 2017 to build sewers with inner diameters between 40 centimeters and more than two meters.

“Competent limestone, groundwater and existing sewers and pipes are a challenge for us and require a first-class tunnel machine,” says Jamal A‘bed. “We have been working with Herrenknecht for a long time and know the advantages of AVN machines: they perform excellently even under difficult conditions and can be precisely controlled thanks to an electronic laser guidance system. With them we are on the safe side.” In addition to an extensive sewage network, IDRIS also includes a new central wastewater disposal line up to 62 meters deep, which will gravity feed to a treatment plant outside the city. “The new sewer system will make Doha fit for the future,” says A’bed. 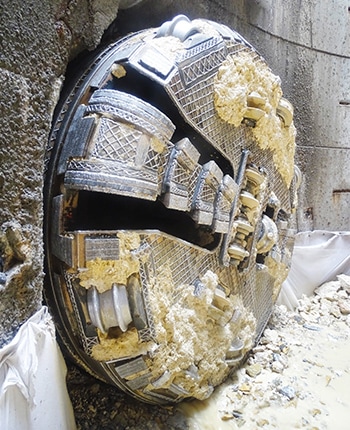